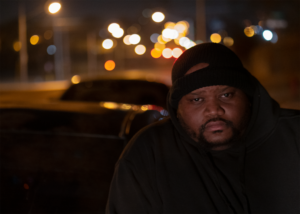 Residing in Junction City, KS, Sleeze the Kingpin has been making noise with his gritty gangsta raps. Born in Los Angeles, CA but later moving around in his youth, he joined the army at 19. After beating capital murder charges back in 2019, he adopted ‘Kingpin’ into his rap name and began focusing on his music career. With only a few singles under his belt, he has been making waves throughout streaming services and is looking forward to dropping his first EP Kingpin for President. Naming Rudy Ray Moore as one of his biggest inspiration, he hopes to run his own label as well as create generational wealth for his kin. Owning his own music label, PIS PO RECORDS, he writes his own raps often collaborating with JWood, Element, JSLIM, and TeeDotPee.

“This shit hard as fuck coming from a street mentality. These people scam on a different level that you can’t handle a street way, took a lot of getting used to thinking shit was going to be square business I had a rude awakening,” he warns when talking about his experience in the music industry. This does not dismay his drive and he advices his fans to learn from his mistakes. When his focus isn’t in music, he likes to spend time with his family often traveling with them and meeting new people. He has enjoyed the journey he has embarked in and only hopes to bring up everyone with him. He loves meeting fans and hearing how his lyrics resonate within them. Before he was locked up, he owned a restaurant and often fed those in need and orchestrated a toy drive for his community. This further pushes him to go after his goals and he clues that there is more to come. With his rise in the game, he wants to thank his fans and appreciates all the love he has received.