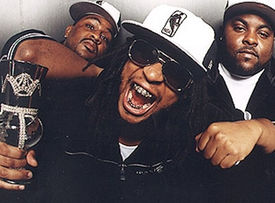 “Get Low” (2003) – Lil Jon & the East Side Boyz ft. Ying Yang Twins: A prime example of Crunk music. A subgenre of Hip-Hop. The genre started around the early 90s but became mainstream in the 2000’s thanks to artists like Lil Jon and the Eastside Boys. Decades later, this song brings all the vibes whether it’s played at a function, club, or cookout!