Hotboi is a unique breath of fresh air when it comes to artists in the Hip-Hop industry. The Orange County, California artist is an active student of Moorish Science Temple of America, so he tries to bring enlightenment to almost all of his songs. He goes into detail explaining, “HipHop is kind of known for its sometimes overused concepts (sex, drugs, violence), and its vulgarity. I try to bring awareness to other elements of life. Don’t get me wrong, I like sex, and I’m familiar with drugs, and even more familiar with the streets, but I feel like those subjects needs to breathe a little bit. Plus, there’s a lot more to the world that isn’t being spoken on.”

How would you describe your sound and genre?

Hip-Hop/Soul music. Divinely instructed but also deeply rooted in the craft of HipHop. I’m an active student of Moorish Science so I come thru with that enlightenment in almost every song. Conscious melodic feel good music.

Why music? Describe your passion.

Music moves me. It puts me in a place of peace and happiness because I express myself best through music.

Music allows me to strategically express emotions that I might otherwise suppress, due to my inability to properly articulate my feelings in the spur of the moment. Music lets me think it out, and then pen it; which also allots people time to take it in, and then process it. My passion is in all forms of creation, not just music, but also visual arts.

What impact are you looking to make with your music? Who do you want to impact?

My goal when it comes to music is to impact the right people, the ones who need my message. Beyond that, I want to make money doing what makes me feel most unbounded or free. And I definitely want to reclaim truth for me and all my folks.

I want to infuse certain elements of my character into the music, to get people used to speaking from a place of wisdom, knowledge and power. For example, incorporating etymology is important to me because we need to get to a place where we are more conscious of the words we use, and the impact that those words have on our reality. I also want to introduce truth, teach the people how to cleanse their emotional bodies from fixed opinions, and deceptions. Truth can impact a 4-year-old just as much as an elder. I’m trying to impact both of them, and everyone in between.

Have you been compared to other artists? If so, who?

Nate Dogg , Kendrick Lamar, Big K.R.I.T., The Pharcyde, J Cole and a few more. Different people hear different things in me, but I don’t compare myself to any of these artists. I respect them, though.

What are you most known for? What got you noticed?

I’m for sure known for being ethereal. It’s just my nature though. I wear a cloak of consciousness and kindness. It’s not something I try to do, it’s just intrinsically who I am. The brotha at the liquor store waits for me to say uplifting things, cause that’s what I do every time I see him. If I’m consistent at anything. it’s being me, being aware, being kind. I’m going to assume those things are what got me noticed. Mindfulness is a breath of fresh air, even to me.

Hotboi released the EP, “Look Listen Learn” in 2011, Divine Intervention, in 2017, and has just released a new album this week called, The Raw Material. The new album consists of 10 songs and 8 features. Hotboi released previously released two singles from the album called, “Home Grown” and “Higher Self.” Supporters can find all of Hotboi’s music on Apple Music, Spotify, Soundcloud, and all other major streaming platforms. 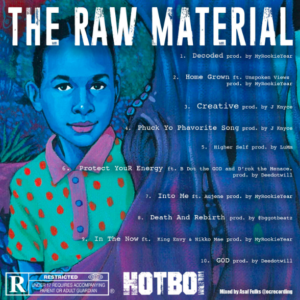 The independent artist is not only in the music world, but also has the special talent of acting as well. In 2017, Hotboi did a background scene in the movie, “Bright,” staring Will Smith. Hotboi also played a Tupac photo double in the TV show, “Unsolved,” about Tupac and Biggie in 2018.

Hotboi leaves readers with this message:

“The only real freedom from mental constraint is through knowledge of self and truth…. That everyone’s life is worth their own full participation and people should follow their hearts’ desires….. That our purpose is best accessed through our hunger, our talents, and our understanding of ourselves.”