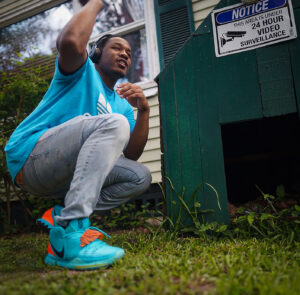 Chill and laid back, as he describes himself, Atlanta-based independent artist Pedro Walker has a unique story to tell. After losing his entire family and finding himself alone on the streets of Atlanta, he eventually found peace in music, opting to become an artist to share his remarkable life story with the world.

After the loss of his family and home, his life took on a “homeless guy” style, one in which Walker was not even sure where his next meal would be coming from. “At age 14, after my whole family, from my grandma to my little brother, passed away, I was committed to the state for two years as a juvenile delinquent. When I was finally taken in, my adopted parents were abusive, forcing me to rob and fight on the street every day to survive.”

These truths are well defined in his song ‘Come Up,” in which he shares his trials as a homeless youth and his struggle to cope. “It was epic how I overcome the sorrow and pain by turning it all off and just immersing myself in my art: writing, writing, writing, and more writing. And when I got tired of that, I wrote.”

In 2016 he started recording music with engineer, producer, and artist Bason Bangerz. By his admittance, the two were not taking it seriously until, as the artist relates, “I was walking downtown to my job, and someone pulled up on me and asked if I was Pat, which was my old stage name.” That was my first taste of the business – I knew right then that I wanted it!” According to Walker, “my fans and my pain – everything I went through – pushed me to keep striving – and it worked.”

Pedro visited Covenant House Georgia of Atlanta to talk to the kids there. “I shared my life story with them and offered some advice. I told them, “even if you’re in a bad crowd, it doesn’t mean you have to be a product of that environment. It’s fine, y’all cool, but sometimes you gotta risk NOT being cool to get the right thing done.’”

Pedro Walker teased us with a hint of the projects he is working on: “Jungle Fever” and “The Lyrical Messiah” represent entirely different genres, which showcases Walker’s diversity to his fans. “This music will be different, not like anything I’ve done, beyond the competition. I will be sharing an authentic part of my life, my path, and my soul – it will be epic.”

One day Walker sees himself off the streets of Atlanta and living in his own house, driving his car, and hearing his music on the radio. But, as the artist stated, he will always remember his life on the streets and the plight of his brothers and sisters, the homeless of Atlanta, and the world.

“I want to say thank you to everyone. You have all helped me during my epic journey. I could not have done it without each and every one of you, including my haters!”

Walker is genuinely a diverse artist with music that tells a story and conveys a message. If his current work is any indicator of his future potential, this artist will be going places.