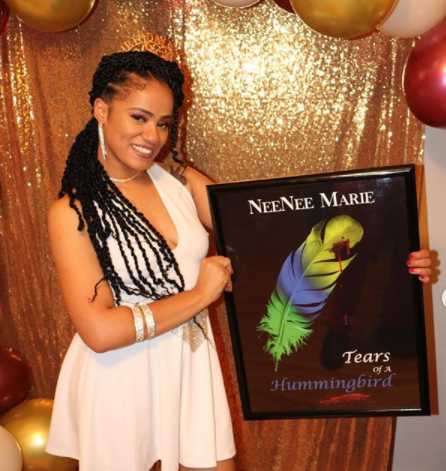 Tonisha “NeeNeeMarie” Glover, M.Ed. is a Cleveland native who grew up modestly in the inner city. She was raised by a single mother of three and comes from a large extended family of cousins, aunties and uncles that refers to her as Nee Nee, a childhood nickname that followed her into adulthood. She carries with her a host of memories from her early years; some pleasant and some difficult to digest, such as the domestic violence she witnessed growing up. “Life ain’t been no crystal stair” (Hughes, 1994), but Tonisha was determined to make a better life for Herself.

Tonisha has always had a natural passion and appreciation for creativity and the arts. She expressed herself mostly through poetry, dance and theater as a teenager. These premature talents resulted in an offer for a full tuition scholarship to Ohio University for theater. She contemplated the idea for weeks before eventually refusing the offer. Although she absolutely loved the arts, she decided to attend Kent State University. She received a Bachelor’s degree in education and a Master’s degree in Higher Education and Student Personnel. Tonisha believed that education was a way out of poverty and a distinct path for success and opportunities that she would have been denied otherwise.

After receiving her graduate degree, Tonisha decided to return to the Cleveland area with her toddler son to give back and serve her community through higher education. There, she serves as a coordinator and college advisor for high school students taking college courses. She found that she enjoys working with youth from the inner city and preparing them for post-secondary education. Now that her educational appetite is mostly satisfied, Tonisha has had a returning hunger for creativity with words. She has begun to write and express herself freely through poetry and short stories once more, only this time, from the perspective of a mother, spiritual being, Black woman, mental health advocate and pescatarian with more life experiences than before.

Tonisha Glover, now Author NeeNee Marie is set to release her debut novel “Tears of A Hummingbird” at major book retailers everywhere summer 2021. She is determined and passionate about sharing authentic, yet entertaining stories that people across the world can relate to and/or learn from.

She invites you to follow her path via social media:

In this article:M.ED. HUSTLER OF THE MONTH DROPS NEW MATERIAL, NEE NEE MARIE