2020 has been a wild ride of extreme highs and profound lows for the rap star Megan The Stallion.  She manage to put her adversity behind her and jam packed a year with monumental accomplishments of one after another.

It’s been a tumultuous year for Megan: She dominated the internet with a Beyoncé feature on her hit song “Savage (Remix),” then somehow topped top that with a Cardi B collaboration, the infectious “WAP,” her first No. 1 singles. Then she showed off her super model looks while gracing  the covers of Time and Rolling Stone. 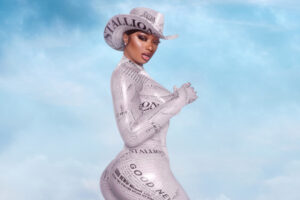 Megan starts off her debut album with a bang. The very first track is straightforward, fittingly called  “Shots Fired,” a track that samples the iconic Biggie’s 1994 “Who Shot Ya.” In the song she sheds light on her horrifying experience with Instagram musician Tory Lanes. If you have been under a rock this year (which most of us actual have given the current state of our country and the world),  According to the Associate Press In a criminal complaint, prosecutors said Lanez, fired on a victim identified as “Megan, after she got out of an SUV during an argument in the Hollywood Hills on July 12, and “inflicted great bodily injury” on her. It was the story that kept on giving and I feel it actually hasn’t been a complete resolution to what exactly happened in that car.

Getting back to the album remaining tracks showcase a commitment to having fun with a variety of new collaborations such as City Girls (“Do It On The Tip”); SZA (“Freaky Girls”) Big Sean and 2 Chainz (“Go Crazy”).

I do feel the debut album is lackluster and could have been done a little better. There are couple tracks that are just album fillers. The highlight of the album for me was tracks 1-6. The album does get a very solid start with the signature style that we all grew to love from Meg, but as the album progress it starts to get tiresome. The overall production of the album is very basic. I will say because of the up-tempo tracks it’s a pretty decent album to work out to.

Check out her album and tell us what you think.