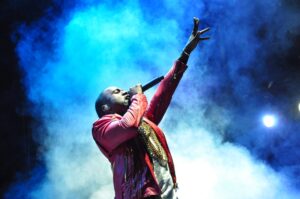 Kanye West is hosting a third listening event for his new album DONDA, this time in Chicago.

Wednesday, August 18, Kanye West announced on Instagram that he will host the third of a series of listening events dedicated to his still-unreleased album DONDA at Soldier Field in Chicago on August 26, at 10 p.m. EST. Tickets are available for purchase starting on August 20.

The last two listening events featuring his new album were held at Atlanta’s Mercedes Benz Stadium, on July 22 and on August 5 and live-streamed on Apple Music. Both events reached a record number of attendees – the very next day West posted 16 million total on-demand streams for the first one, and the second event reached 13.6 million.

The album’s delayed release has caused the highest demand for YEEZY to surge by 347 percent – current Google and on-site search data show that people are more interested in the YEEZY brand than ever. The latest iteration of West’s Yeezy x Gap puffer jacket, which the artist wore at the listening party, is no longer available. Kanye has pulled in approximately $7 million from the album’s merch sales alone.

DONDA was expected to arrive the Fridays after both listening events but never appeared on streaming services. However, according to the latest West’s manager comments, the album will drop after the upcoming listening party that will take place in Chicago on August 26.