A grand jury indicted the officer on charges of endangering neighbors with reckless gunfire, but no one was charged for shooting Ms. Taylor in her Louisville apartment.

One former officer was indicted. Two other officers who fired shots were not charged.

A grand jury indicted a former Louisville police detective on Wednesday for endangering Breonna Taylor’s neighbors by recklessly firing his gun during a raid on her apartment in March. No officer was charged with killing Ms. Taylor.

Grand jurors indicted Brett Hankison, the former detective, on three counts of “wanton endangerment,” saying he had threatened three people’s lives by firing bullets that traveled through Ms. Taylor’s apartment and into theirs. A pregnant woman, her husband and their 5-year-old child were asleep in that apartment, and the bullets shattered a glass door but did not harm the couple and their child.

Mr. Hankison had fired into the sliding glass patio door and window of Ms. Taylor’s apartment building, both of which were covered with blinds, in violation of a department policy that requires officers to have a line of sight. He is the only one of the three officers who was dismissed from the force, with a termination letter stating that he showed “an extreme indifference to the value of human life.”

In a news conference following the announcement of the grand jury’s decision, Kentucky’s attorney general, Daniel Cameron, said that he knew some people would not be satisfied with the result.

“The decision before my office is not to decide if the loss of Breonna Taylor’s life was a tragedy — the answer to that question is unequivocally yes,” Mr. Cameron said.

The decision came after more than 100 days of protests and a monthslong investigation into the death of Ms. Taylor, a 26-year-old emergency room technician who was shot at least five times in the hallway of her apartment by officers executing a search warrant.

Because the officers did not shoot first — it was the young woman’s boyfriend who opened fire, striking one officer in the leg; he has said he mistook the police for intruders — many legal experts had thought it unlikely the officers would be indicted in her death.

Three officers fired a total of 32 shots, Mr. Cameron said. Rounds fired by Sgt. Jonathan Mattingly and Detective Myles Cosgrove struck Ms. Taylor, he said, while Detective Hankinson, the only officer who has been charged, fired 10 rounds, none of which struck Ms. Taylor.

Ms. Taylor’s name and image have become part of the national movement over racial injustice since May, when her case began to draw national attention. Celebrities have written open letters and erected billboards demanding that the white officers be criminally charged for the death of a young Black woman. City and state officials feared that a grand jury decision not to prosecute the officers would inflame a city that has been roiled by demonstrations that have sometimes turned violent.

Ms. Taylor’s mother sued the city of Louisville for wrongful death and received a $12 million settlement last week. But she and her lawyers have insisted that nothing short of murder charges for all three officers would be enough, a demand taken up by thousands of protesters in Kentucky and across the country.

Ben Crump, a lawyer for the family, wrote on Twitter that the failure to charge any officer for killing Ms. Taylor was “outrageous and offensive.”

Many legal experts said before the charges were announced that indictments for killing Ms. Taylor would be unlikely, given the state’s statute allowing citizens to use lethal force in self-defense. John W. Stewart, a former assistant attorney general in Kentucky, said he believed that at least two of the officers who opened fire were protected by that law.

“As an African-American, as someone who has been victim of police misconduct myself, getting pulled over and profiled, I know how people feel,” Mr. Stewart said. “I have been there, but I have also been a prosecutor, and emotions cannot play a part here.”

Sergeant Mattingly sent an email to officers this week saying that he and the other officers in the botched raid had done “the legal, moral and ethical thing that night.”

Protesters gathered in downtown Louisville shrieked in disgust after the charges in the Breonna Taylor case were announced. They were particularly upset that the only officer charged was required to post a bond of just $15,000.

After the announcement, which the protesters listened to live, ended with only one officer charged, people yelled “That’s it?”

Some people swore. One person called for the crowd to burn the city down. Several people sobbed and had to be consoled.

One woman sitting on a chair with a T-shirt printed with Ms. Taylor’s image had to be consoled by several people.

“It tells people, cops can kill you in the sanctity of your own home,” Linda Sarsour, a Palestinian American activist, said as she wiped tears from her face.

Desaray Yarbrough, who lives in Louisville and came out of her house when the march came by, said the attorney general’s announcement would do nothing to quell angry demonstrators.

“It’s unjustifiable,” Ms. Yarbrough said. “The lack of charges is getting ready to bring the city down.”

Protesters started marching through the streets shortly after the decision was announced, as a helicopter buzzed overhead.

For about 10 minutes, a group of about 150 protesters blocked the intersection of Broadway and 6th Street, just outside the barricade.

Protesters argued with angry drivers who had their way blocked. Most cars turned around at the direction of the protesters who stood in their way.

Within minutes, more than a dozen police officers arrived, and the protesters continued down Broadway.

Block by block, the police caravan followed. Some, armed with assault rifles, stood by their vehicles.

On 2nd Street, four police cruisers in line with the march were surrounded by demonstrators.

Many walked by with their hands up, while a few yelled at the officers and held up their middle fingers.

By 2:15, about 250 demonstrators were marching, with as many as two dozen police cruisers in pursuit.

A local entrepreneur who goes by the name Scoota Truth, 35, joined the march through the city Wednesday and said it was time to see real change.

‪”If anyone can get killed how Breonna got killed by the police, there’s no way we should live in a society where that’s possible,” he said.

The officer is charged with ‘wanton endangerment.’ What does that mean? 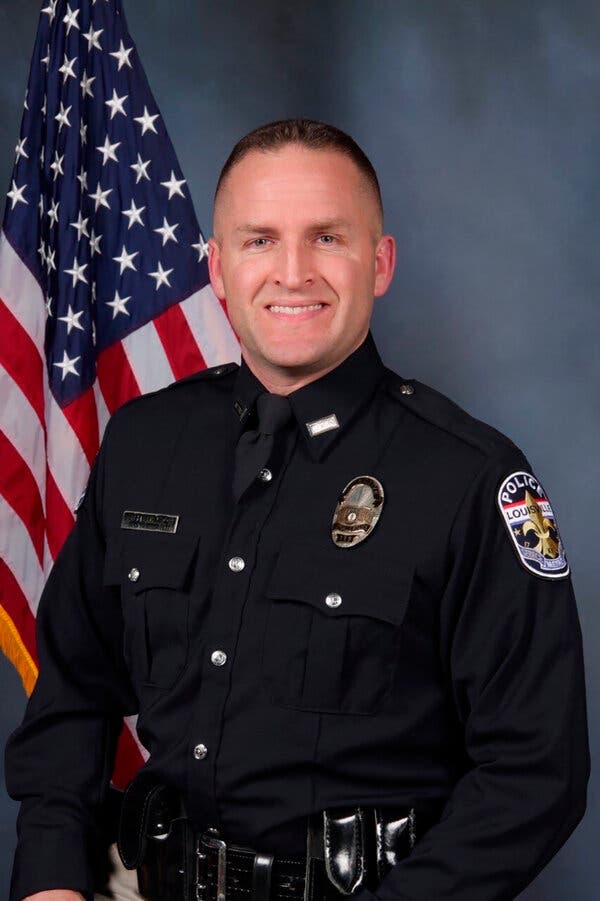 The grand jury indicted Mr. Hankison for three counts of “wanton endangerment in the first degree,” a felony that carries up to five years in prison for each count.

Mr. Cameron, the Kentucky attorney general who will now oversee the prosecution of Mr. Hankison, said the former detective had been charged with the crimes because the grand jury believed that the shots he fired had endangered three people in an apartment next to Ms. Taylor’s.

Under Kentucky law, a person is guilty of the crime when “under circumstances manifesting extreme indifference to the value of human life, he wantonly engages in conduct which creates a substantial danger of death or serious physical injury to another person.”

Mr. Cameron said on Wednesday that the F.B.I. was still investigating whether any of the officers committed a federal crime, such as violating Ms. Taylor’s civil rights.