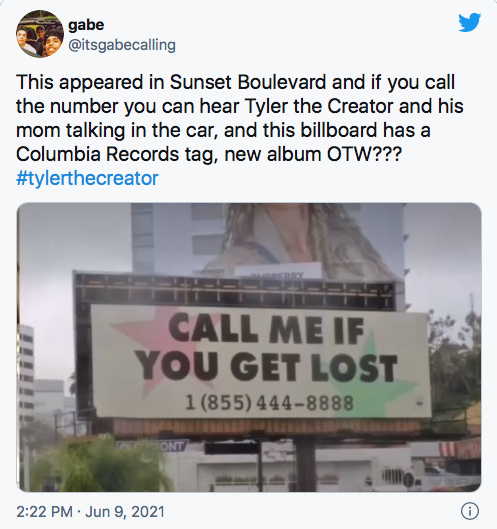 There are clues that lead us to believe that Tyler, The Creator might be releasing a new album soon! On June 9th, a fan noticed a billboard with a random number and the words, “CALL ME IF YOU GET LOST”. They noticed a Columbia Records logo in the lower right corner, and when you try to call, you hear a recording of the Odd Future album. It is a conversation between Tyler, The Creator, and his mother. Tyler’s mom speaks passionately about her love for her son, and the explicit conversation hints to listeners that there could be songs on the new album about their relationship. There is not a lot of detail or certainty yet that a new album is coming, but this billboard was a huge clue that left fans intrigued and excited! Tyler, The Creator is creating major album buzz!